Jenny Holtermann and her husband are both fourth generation farmers in their families. They currently farm almonds with his brother and father, Holtermann Bros Ag. in Wasco, California, north of Bakersfield. Jenny’s family has been using Weiss McNair equipment for as long as she can remember; her husband’s family for nearly 30 years.

Jenny’s family started farming in Chico, California in the early 1900s. Her grandfather, father and uncles started planting almonds in the late 1960s. Her father, now deceased, has always been a loyal customer. When he was getting back into using harvesting equipment, he went straight to Weiss McNair and didn’t even think about an alternative.

Her husband’s family started farming in Wasco also in the early 1900s when his great-grandfather settled there to farm. His grandfather planted almonds in the 1970s and they’ve been farming almonds ever since.

Together, Jenny and her husband are raising the next generation hoping their kids will want to farm too.

The current sweepers owned by Holtermann Bros Ag. are 10 to 12 years old and have proven to be strong, superior equipment that lasts.

The JD80 Low Profile Sweepers used in the Wasco orchards is a favorite of Holtermann Bros Ag. Because the equipment is lower to the ground, making it easier to sweep under low hanging limbs and branches we have in south valley orchards.

Jenny says, “Since we farm in the southern end of the Valley, we’re a few hours away, but whenever we have a breakdown, or we need something in a pinch, Bill is our contact and has personally brought down parts to us when we needed it. That’s a willingness to help your clients and speaks magnitudes when you’re dealing with a time-sensitive crop. Our harvest is only a couple of months and it really is helpful when a company will help you out when you need it.”

"I think one of the big things you have to consider when purchasing is customer service and Weiss McNair has some great customer service. They have great, friendly staff that really put that special touch on their business and are always there when you need assistance. They’re just a very personable company.” 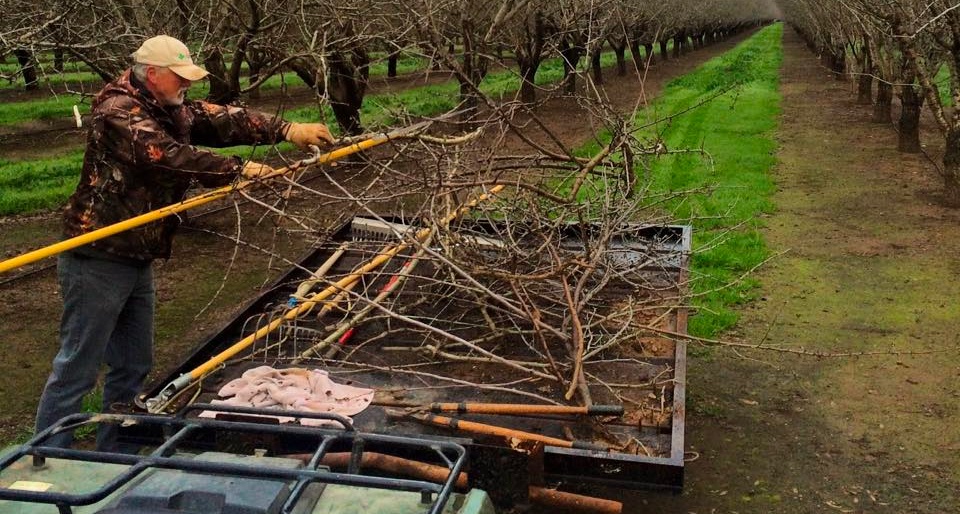 Blue Iron Reliability is What Weiss McNair is Made of

George Nicolaus of Nicolaus Nut Company has been in the agricultural business for 40 years. Thirty of those years has been in the orchards near Chico, California; and for 29 of those 30 years they’ve been using Weiss McNair equipment. His first machine was a sweeper. It was used when he bought it and had its own idiosyncrasies - like every machine does - but he’s owned a lot of “Blue Iron” (as he refers to Weiss McNair equipment) over the years.

Nicolaus Nut Company owns two of the Weiss McNair JD80 sweepers and a new 9800 Harvester they recently put into service because the equipment does the job it’s meant to do. Equally as important, the Weiss McNair team takes the time to make it right if an adjustment needs to be made, and if something’s broken they always have the parts on hand.

If there’s a real problem, Weiss McNair does their homework to determine what’s wrong and does their best to make it right.

George says: “One of the biggest challenges in farming orchards is owning a piece of reliable equipment and recognizing that the perfect machine doesn’t exist - but the fact is when a part is needed Weiss McNair has it on the shelf. “It’s a very competitive industry these days between the different providers and vendors of harvesting equipment. Everyone has their own unique needs and conditions that they have to operate in and I encourage people to shop around but tell them to be sure to drive some of that blue iron [referring to Weiss McNair equipment] and give them a chance because Weiss McNair has been there when I needed them. Whenever I’ve needed some extra attention they’ve done everything they could to meet my needs and it’s appreciated.”

Stay informed with all the latest
news and information.

Website by: Half a Bubble Out | Telling your story...